I have started delving into the details of actual stats and the combat mechanics related to them.  I want AOS to have an action RPG feel when it comes to combat but without the tediousness of collecting and selling tons of items.

The aspects I want to pull from this genre are the combat feel with the ability to tailor stats and skills through magical equipment and talismans.  Being more of an adventure game the equipment will be limited and staged in most cases with some variation that fits the story and the various paths through it.  It won’t be the statistical auto generated free for all that is the hallmark of the Diablo genre.  However it should have enough variation to be interesting and the gear will have some kind of history and be intertwined with the how/when/where it can be discovered.  This fits in nicely with the story driven slant that AOS will have.

What I want to make interesting is the combat itself through the use of various skills and the effects they produce.  I also eventually want a visual presentation of how one stat influences another stat and an indicator of how much it influences that stat – like how skill trees are made but backwards.  It should be very clear what primary attributes are influencing your abilities and by how much.

After some searching on the internet I found the definitive guide to Diablo’s combat mechanics.  This is a great educational source for understanding what is involved in generating the type of game play Diablo made famous.  I found it intriguing seeing much of the internals of what I still remember playing many years ago.  Like so many others I was enthralled and spent endless hours playing that original game and the second incarnation.  There will likely be many spontaneous vacations and sick days surrounding the imminent release of Diablo 3.

I think AOS will be inspired a bit by the Diablo mechanics simply because this is a game I loved and fits well with the action adventure style of game I want to make.  I have worked out the basic structure of stats that any character in the game will have.  This includes the player/pet characters as well as all the non player characters which may be either hostile or friendly.  I have seen many games where the player character has a more complex definition via the RPG attributes while all other non-player characters are very simply defined with a few stats for hitpoints, defense, and attack.  What I want to do is have all characters be the same internally.  This provides the ability to do things like applying detrimental effects on the stats of enemies and have the corresponding impact the same as these affects on the player.

The stats system for characters that I have worked out so far includes the following:

These are all pretty standard and represent a system that is well worn in the RPG world.  I have decided on names that I feel are better representative and have a clearer meaning than the traditional set.  I am sure you can understand how they fit together.  Both the inherent stats and learned stats feed into the reservoir stats and action stats and are used for handling everything in the game.

Here are some screenshots showing the character stats and also how information is summarized in popups: 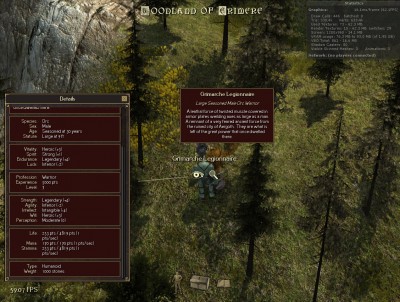 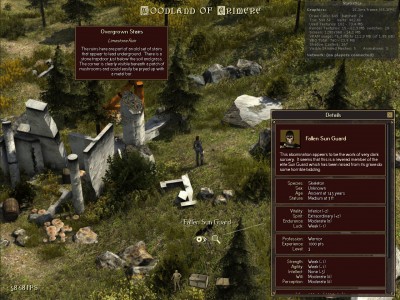 As I have mentioned before, my desire with AOS is to attempt to simplify the system both in how it works and in the presentation of the information that represents your character such that it is easy to understand and less about number crunching.  I know there are many out there who love the crunching of numbers and evaluation of statistics in a game and all of this will still be there, however I am attempting to provide a more elegant presentation of that information that is easier to understand and hopefully enhance the illusion that this is an imaginary world you are in.

Some examples of this include using categories for many stats that show descriptive text based on ranges of values.  An example of this is the Stature stat.  Another area of simplification is how attributes are represented and presented.  Inspired by FUDGE, I wanted to take an approach where you start at a norm and increase or decrease from that.  This is much more intuitive in my opinion than having some large number range that is meaningless.  An example of this is how all the Attribute stats are presented with the plus/minus descriptions of the ability in that area.

One thing to point out is that there are always numbers shown along with these descriptions so that it is easy to gauge and understand the relationship with the other values because this is not possible with just the text or it would require guessing if one entry was really better or worse than the other.

I have also been working on item and equipment stats so I am now at the stage where I am trying to put the combat system in place which may take a while.  Part of this process is going to be adding visual and audio effects related to the combat mechanics which will likely require a system to support the management of them on the equipment and characters.  I also need to build some of the visual feedback system which will show damage and critical hit information as it happens.  As you can imagine all of it gets very complicated so wish me luck.  Hopefully the result will be a cool video to watch.