Yes, you read that correctly!  I have been using some of my spare hobby time lately to collaborate on something completely different.  I have been working with my good friend Caleb from Part12 Studios to help take their game Sluggo and morph it into a super awesome arcade game for the OUYA, and hopefully other platforms!  You can follow the official progress on the Super Sluggo Facebook page.

OUYA you say?  Yes the little console that could is pretty cool.  It is essentially developing for Android, but with a controller.  This is really only the first step, the hope is to use an OUYA release to sort out game play and go through an entire release cycle – something I have yet to do with a game.  It is a learning experience for me to say the least.  Then next year there is the possibility to take it to the PS4 and/or XBox One.  This is of course if the rumored self publishing and Unity support pans out on either of these.  The game will also likely release on other devices like tablets and maybe even a Windows/Apple store release.  We will have to see how it goes.  The OUYA is a bit of a testing ground in this regard.

So far it has been mildly frustrating but fun to work with the OUYA.  I am currently developing the solar system simulator by reworking all the stuff in Space for Unity which is a great little space art package on the asset store.  It is not really designed with mobile in mind so it has been a bit of work to build something out of it but the source art is great and that is what counts.  This is what things are currently looking like: 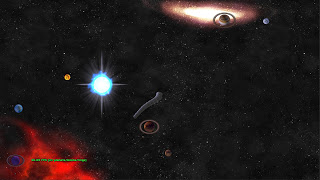 I have a nice randomly generated solar system that is ready for eating!  Yum!  The worm is just placeholder material but it slides around as worms should in space.

I had to work out initial performance issues, which all derived from fill rate problems due to alpha blending of course.  It now runs at a nice 60fps at 1080p – rendering anywhere from about 20 to 40 planets/moons/rings and also the sun which has three levels of particle effects, and background nebulae and galaxies.  Everything is randomly generated, within reasonable constraints of course, and is also color coordinated, so it looks nice.

My first tip for newbie mobile developers is to turn off the option to clear your camera to a background color.  My second is to not try and use lens flares.  My third is to tweak any particle effects to use the absolute minimum number of particles necessary.  You shouldn’t use any alpha blending at all if possible, and where you are, reduce overdraw by optimizing your plane into a mesh that outlines the areas of the image excluding large clear sections.

Well that is all for now.  My next step on this endeavor is to finish the planet munching worm!  Can’t wait to see what Caleb’s art team has cooked up for this lovable little guy…

UPDATE: This little side project was put on hold at the beginning of 2014 because I just didn’t have the spare time bandwidth to work on it and Lost Loot at the same time.  My hope is to eventually come back to this and maybe make it into a fantastic miniature scale VR game if Caleb will let me!