Half-Life 2 and the Oculus Rift

I am convinced now more than ever that devices like the Rift are the future.  Actually being inside the Half-Life 2 world is both mesmerizing and frightening.  Nothing like wandering down dark zombie infested sewers for real to get your heart rate up.  Thankfully I have played the game through almost half a dozen times so I know where to go and what pops out at you.  Doing this for the first time in the Rift would be intense to say the least.

One of the things that struck me as the most compelling was interacting with the NPCs in the game.  HL2 is known for it’s amazing characters which were groundbreaking at the time.  They are very advanced and detailed, and with the Rift, are right there like another person in real life.  It feels different interacting with characters that you stand toe to toe with compared to through a monitor,  it takes on a much more intense feeling.  This will be an area that has great promise for future development and there has been lots of talk on what can be done.  There could be much more detailed and intricate interaction, with feedback given just by how you are looking at the character for example.  Although, how responses in dialog are communicated back to the NPC is still in question.  Since most of what HL2 does is theater, with you as a silent participant, it will be interesting how this can become more interactive and stay immersive.

I also found that using a keyboard and mouse, even with the Rift on was comfortable and works.  With all the keyboard controls focused on the WASD and surrounding keys, and also the easy to find stuff like the control, shift, and space keys, I didn’t have trouble playing through the game blind.  If I lost my keys though then I had trouble, and had to lift up the Rift to peek down and find them again.  I could imagine keyboards with dimples on the W or S key being important in the future for gamers.  Valve did a wonderful job with the aiming also, which has a target that exists in 3D and moves with the mouse.  This also doubles for turning when the target nears the edge of the field of view.  This is normal interaction but is works well in the Rift and is very natural. 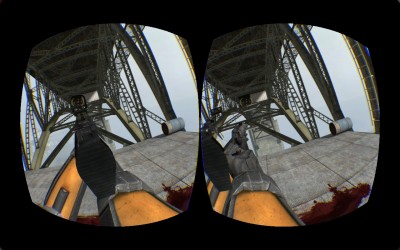 There were many other things that were particularly pleasing, such as smashing manhacks, being able to look down the actual sight of the guns (with the right eye closed as shown above), riding the air boat and the buggy, climbing along the girders of the bridge, looking at video monitors, and the detail of all the weapons that are close to your face.

As I have mentioned before, everything has a sense of depth and scale like in real life, your brain is being tricked into thinking it is really in that imagined artificial space.  This is just the stereoscopic view, but the immersion with the field of view in the Rift makes it an extremely powerful feeling.  You also see so much more detail in all of the objects in the world.  I can only imagine how this will improve with better resolution and a larger field of view that covers almost all of the peripheral vision.  There is already a prototype that sports a 1080p screen being shown at E3 and this is going to be the minimum resolution in the commercial version.  Perhaps we will have our Retina display version after all.

I have had several family members and friends try HL2 with the Rift and they found it amazing, but were pretty quickly feeling motion sickness.  I think that and the related issue of GPU to drive the games at a 60 FPS or higher frame rate is going to be the real impediment to wider adoption.

Although, I think once people try it they will buy into it, and perhaps that will get them through to that point where they become more acclimated.  Luckily I have had no problem with motion sickness, probably mostly due to my IPD being pretty close to the defaults.  I have played sessions of HL2 for 4 to 6 hours at a time in the Rift.  It will really come down to gamers experiencing it, and deciding that a screen is no comparison, and not wanting to go back.  I guess time will tell.