After some time away, I have started to dig back into AOS.  Things have been progressing a bit more slowly since the end of last year and I have had a number of side projects going on that are taking away from my time working directly on AOS.  However, some of them will eventually be beneficial to this project over the long run.

I have reached a point in the development of the framework and the prototype where I need to step back and work on the main character.  Alyssia has some background material on the Story tab on the website, but I have been working on the concepts behind her abilities and how she will look in the game.  I want to deliver a particular experience with her, especially related to combat.

AOS is going to be different in that combat progression is not going to be a focus in the game.  Combat is going to be delivered more as entertainment and an element of exploration, story development, and puzzle solving.  In that vein and as I have discussed in previous entries, playing Alyssia in her combat roll is going to impart the experience of being a powerful, dominant, and skilled battle mage that has been trained as both a protector and an assassin.   Alyssia is generally not progressing on skills, however she does discover new items and lore that give her more powers and in some cases things that are necessary to survive deadly foes or complete particular puzzles.  I can best describe her style as being inspired by Prince Nuada from Hellboy 2 – The Golden Army, although not dark, but more angelic.  You can see his battle style in this video.  I highly recommend the movie if you have not seen it.

Alyssia’s abilities are both melee and magical and in many ways intertwined.  She posses inherent power that flows through her weapons and she also manifests and throws magic.  Much of the combat entertainment experience will come from physics simulation through destructible environments, foes being impacted by elemental magic and extreme force,  impressive displays of power and the summoning of magical constructs, and so on.  The combat will also require the careful use of mana and maintaining balance.  Combat will incorporate progressions of moves that both provide a visual flow as in a sequence of martial arts movements, and also turn into combos with progressively higher final blows.  Learning and executing these progressions will be part of the experience.  Not executing these progressions properly will diminish the attack, waste mana, disrupt balance, and reduce the visual appeal of the attack.  This is all very vague and a tall order for the creation of a character, but that is the direction I am proceeding.  Ultimately the experience delivered to the player should be the rush of feeling powerful as they execute the proper moves and dispatch increasingly larger numbers of foes in spectacular displays of power and destruction – who wouldn’t enjoy that!

I met a talented artist Breeze Grigas at Boston Indies a while back and he took an interest in the project and developed some initial concept art for Alyssia for one of his classes. 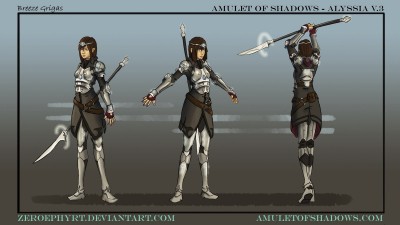 I have spent some time experimenting with Mecanim, the new animation system in Unity 4 and also trying to improve my polygon modeling skills in Maya.  I have to say that producing 3D art is extremely hard and I admire those artists out there that can pump out gorgeous looking environment and character models with tools such as Maya and Photoshop.  I have dealt with sophisticated software before but 3D modeling and animation tools take the cake in complexity.  I am slowly working on some of my own environment models and have aspirations to do the character model for Alyssia.  I am working through a good book on Unity and Maya called Creating Games with Unity and Maya by Adam Watkins.  I would recommend it to anyone wanting to learn the two tools.  You should also get the Introducing Autodesk Maya book as a companion as it is invaluable as a basic resource for the software.

As I have said in the past, I love it if anyone provides feedback, good or bad, on the direction of the project, so please leave comments.