I was very fortunate to be able to attend both Unite 15 and Oculus Connect 2.  Unite was is Boston, and since I live there, I couldn’t pass up the opportunity to be a part of that.  Unfortunately the two conferences were one after the other and even overlapped for a day.  This made for a fun but exhausting week of Unity and VR. 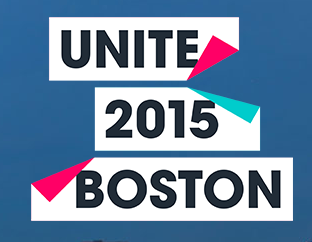 There were many exciting moments throughout both events, and way too much to write about, so I will just leave some photos here along with a few interesting things that happened… 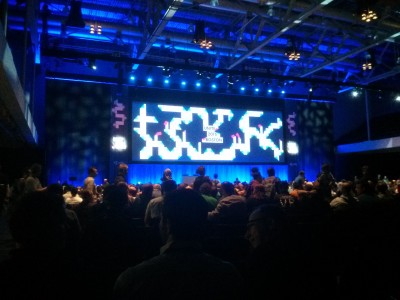 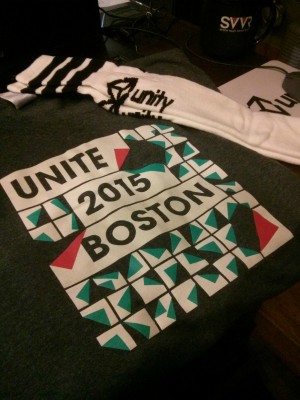 The most exciting aspect of Unite for me was the vast array of talks on VR and AR. I was able to meet many cool folks from Unity and also hang out with the guys working on the Unity VR integration from both Oculus and Unity. Although I felt small, I was able to get many questions answered related to Lost Loot and some of the rendering issues I am having. We may yet get working tree billboards in VR! 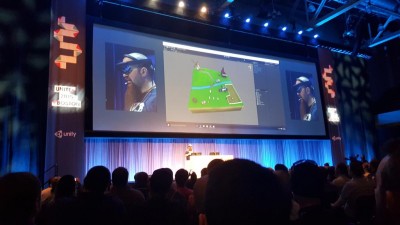 Hololens made an appearance and Pete Moss looked particularly cool using it. I hope someday we get to experiment with it. Perhaps Microsoft will do what Google did with Tango at Unite and give away hundreds of developer kits to lucky folks! 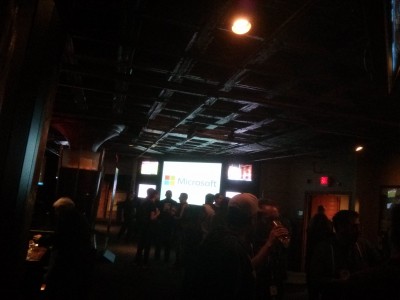 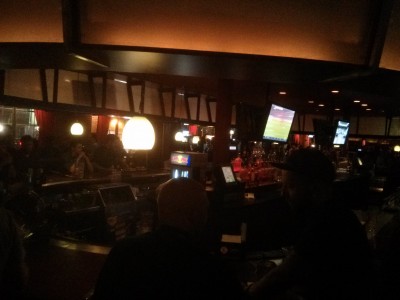 The Unite party was pretty crazy. I have no idea what the bar tab was from that, but it was likely a small fortune. Lots of networking going! The interesting people you meet and the contacts made through these events are priceless. 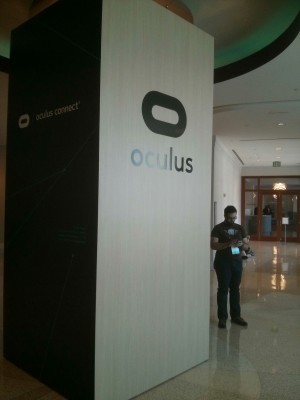 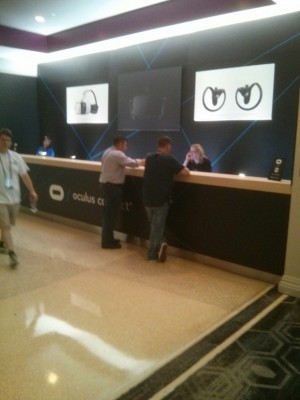 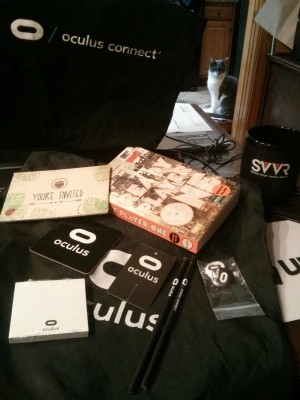 Since the conferences overlapped I ended up missing the end of Unite and the beginning of OC2 while sitting on a plane. I didn’t sleep much and was up for two days! Plane sleeping just doesn’t work for me I guess.

There were many good talks at OC2 and I managed to see lots of familiar faces and also many new ones. I am happy to say that the small close VR community is still there. I felt it very much and sincerely hope we can keep it going through the next few years.

Also, the copy of Ready Player One we got was signed which was really cool.  Thanks Oculus! 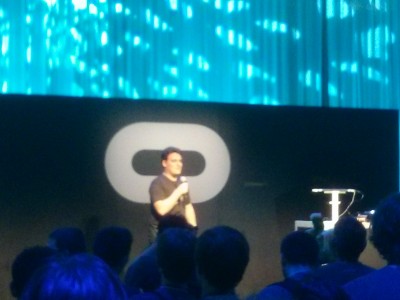 The welcome party was a good way to cap off the first day and I found that the Oculus logo has grown on me. The photo didn’t come out well, but Palmer looks good in front of that! Again, an open bar makes things happen… 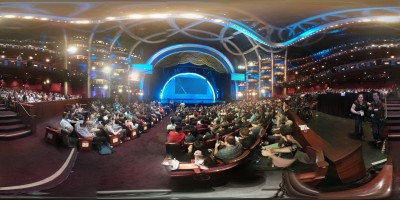 Keynote was excellent! Super happy they pulled off getting Netflix and Minecraft on the GearVR. That is huge for the adoption of VR. Also hearing how ragged the Netflix engineer looked after spending a few days with Carmack doing the integration was priceless! Oculus is really doing a lot of smart things. 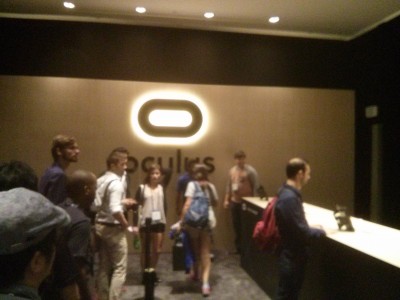 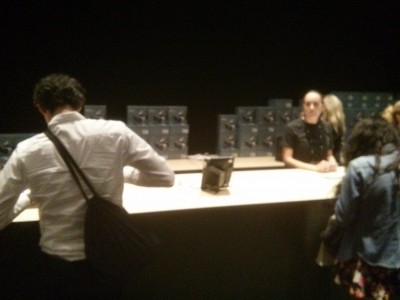 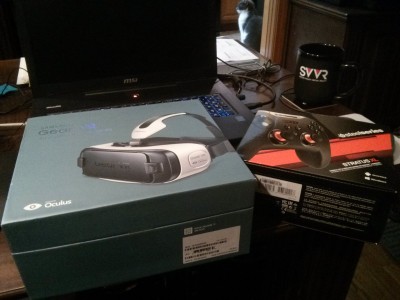 Of course the best part was Samsung announcing the $99 price tag on Gear VR that would work with any model 2015 phone and then giving GearVR innovator editions to everyone. My next phone will probably be an S6 since my Nexus 4 is really on it’s last legs these days (and the camera really sucks when zoomed hence the bad photos!).

All of the GearVR related news has put it in a more viable light for me even with the difficult performance requirements. If only I had more time to work the cool game concepts I have for it… 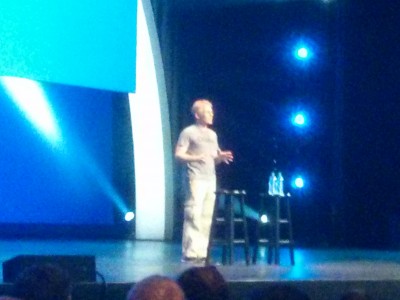 John pulled off a great keynote and it was disappointing when he was kind of forced off the stage… I sure could have listened for another hour myself, but I guess people get tired. 🙂 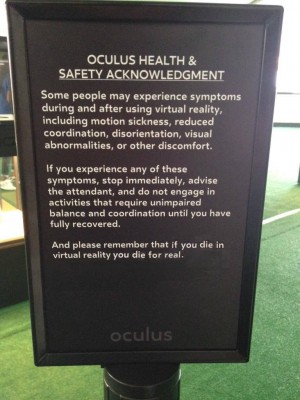 Check out the last sentence on this warning sign!

The real highlight of OC2 was the vast array of demos, all of which were using the CV1 prototypes and most also using Touch. The Toybox demo and Medium demo were the best with Bullet Train being an amazing experience everyone kept talking about. I wasn’t as impressed with Henry as I thought I would be.

I was also able to try the Land’s End demo on the GearVR, and it was very nice – a good example of something super simple and highly polished. I am trying to keep that focus with Lost Loot going forward, reducing scope and simplifying while making a high quality experience. It isn’t as easy as it sounds. 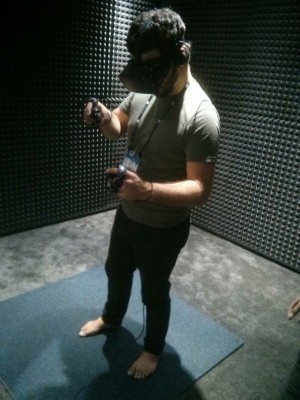 This is my friend and local Boston VR buddy Jono sculpting in Medium. We ended up camping the Medium demo at the very end to get in since we messed up and didn’t manage to try and register slots until they were gone. They were doubling us up to get everyone through.

Medium is very cool and I think has an edge on Tilt Brush for VR paint programs. They did build a custom engine for it which is probably necessary given what it does and likely how difficult it was to do that while achieving the performance required for VR. 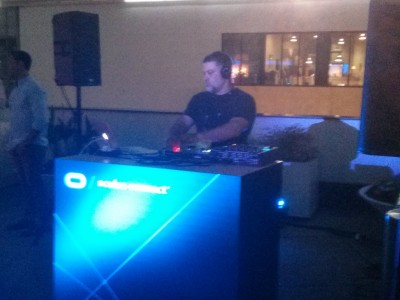 Pool party was nice, excellent food, and so many people to hang out with. All of the Oculus folks were super nice and it was so much fun to hang out with them. This is Peter Giokaris who I met at various times over the years. He did the original Unity integration and is now part of the audio SDK team. He DJs these Oculus parties! 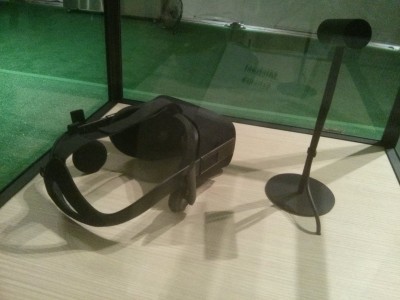 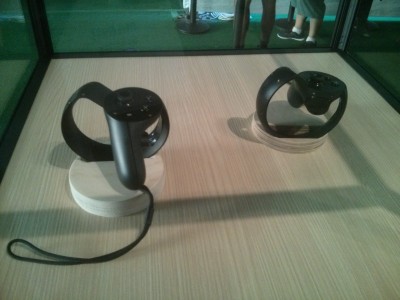 I was very happy to be able to try the alpha version of Lost Loot on a CV1 prototype during the Unity workshops on the last day. So excited for how nice the game looked and how good it felt running at 90fps. The audio was also fantastic through the built in headphones.

I was also able to get some quality time with the Oculus and Unity engineers to look at a few rendering bugs – one of them being the tree billboards that just don’t work in VR. Will be submitting bugs soon and hopefully there will be fixes coming later.

Luckily I was able to mess around with the CV1 prototype for longer than the 45 min planned for the session since I ended up in the last group and was able to spend extra time before they began packing up and had to kick me out. I was able to see how it performed as I increased and decreased my quality settings. The performance of the panels in low light were excellent with zero black smearing.

Targeting 1k draw calls/batches or less and 1m tris or less for desktop VR works as a general rule. For mobile that is 50-100 draw calls/batches and 100k tris. Fill rate can also be tested on desktop by increasing the render target to 1.25 which estimates additional pixels for CV1.  These are all loose approximations but they provide a rough direction.  Of course as everyone points out frame rate is king and visuals must be sacrificed!  Although I am waiting for the day when we can have incredible eye candy in VR. 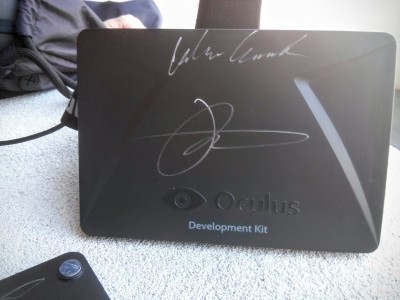 As things were wrapping up the last day, I aided another local VR buddy from Boston to get his DK1 signed by John Carmack. Both he and Palmer signed it since he was one of the first 20 backers. We had to corner him on his way out at the end of the conference, but he was cool about it. 🙂 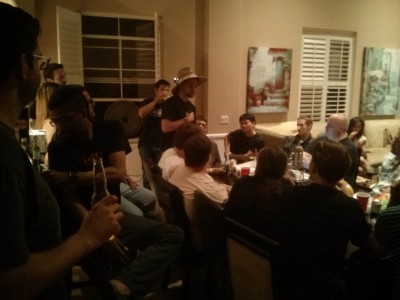 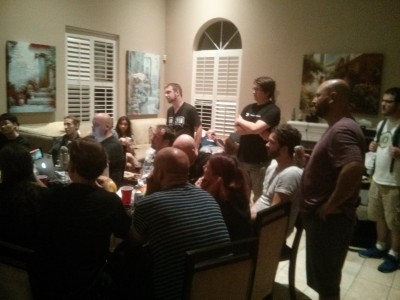 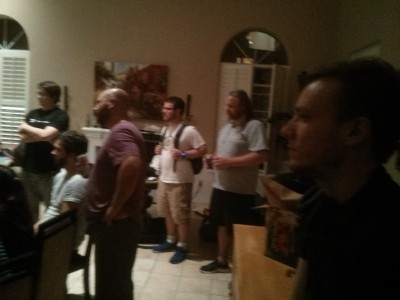 Made it over to the VR beach house after the conference was over on the last day and had fun mingling. Again, the community surrounding this new wave of VR is amazing and I hope it can last. There was another super podcast and streaming of the whole evening. We all had a blast hanging out on the roof deck to cool off after the sun went down! 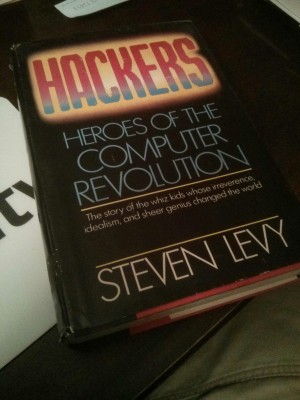 On a final note, I wanted to reiterate Michael Abrash’s mention of the book Hackers in his keynote. This book really inspired me during high school and there are many parallels to this era and the reemergence of VR. I highly recommend reading it.

My hope is that this new wave of VR will change the world and that someone will someday write a book about everything that is happening now within this amazing community of builders, visionaries, entrepreneurs, and enthusiasts. As Abrash said, “these are the good old days”, so go make an impact and enjoy them!