Well, it has been about two weeks since the Oculus Rift arrived.  I have spent many hours with the device glued to my face, exploring what it feels like to be inside a computer generated world instead of looking at it through a flat window.  The experience can best be described as stunning, with a sense that this is the beginning of a new paradigm for anything involving three dimensional graphics, especially games.  There is nothing like it, and like many others, I am a believer and feel it is definitely a game changer.  It really is day zero for VR, only 20 years late. 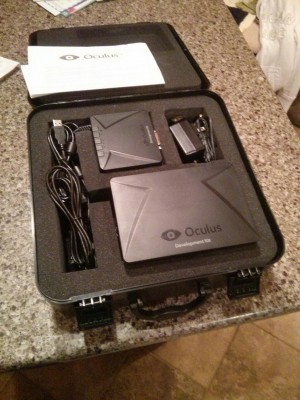 My 3 year old son discovered my coveted device a few days after it arrived.  He caught me with it on and promptly said, “Daddy, what are you doing?”  He then insisted on experiencing it for himself.  If he is any indication, we are certainly headed in the right direction.  It took more than 40 minutes of “walking” him around, exploring the Tuscany demo scene, before I could pry it away from him.  Like me, he seemed to be impervious to any motion sickness.  He would hold the Rift from the front by the bottom corners of the screen case looking up down and all over, even tilting his head to see what would happen.  He would often pull it up then put it back on trying to sort out what he was seeing and if it was real, sometimes attempting to reach out and touch something.  To move he would point in some direction, and give me the command “Daddy, over there.”  I would then drive him with the controller in that direction, usually, trying to figure out the relative place he was pointing to.  We went up and down the stairs in the Tuscany demo at least a dozen times.  I never thought just going up and down stairs could turn into a fun experience, but he was even making driving sounds as we went.  He tried to walk off a few times, and I finally sat him in my lap, mostly out of fear for the Rift and having it’s cord yanked out.  All I could think of is how lucky he is to be growing up at such an amazing point in time. 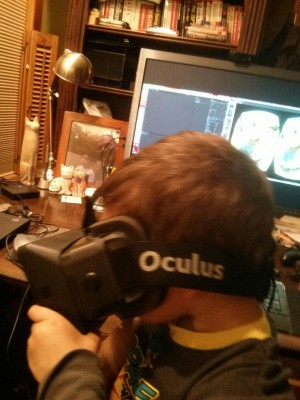 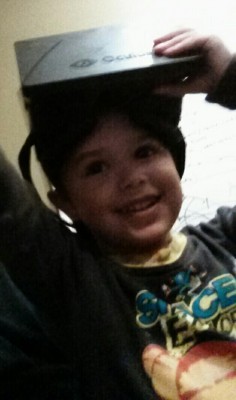 I have been working on a system to produce realistic procedurally generated terrain that will go into the framework I am developing behind AOS.  This is also the first area where I am currently experimenting with the Rift.  I have decided to create a demo island where the player can wander around and find various devices that can be used for climbing and launching oneself off the highest peaks and gliding down into the valleys.  It is both to create an interesting immersive experience and to begin figuring out what it takes to make an interface that works entirely inside the Rift.

Actually “being” on my island for the first time was a surreal experience. There is no way to describe the feeling of being inside a world you have just created yourself.  I must have spent hours just wandering, taking in vistas from the highest peaks, to walking through dense grass and weeds that are almost shoulder high, feeling lost in a sea of vegetation.   You look all around and see detail everywhere that you miss with a flat monitor, and you instinctively start to get the feel for the land.  In the Rift, everything also has a sense of scale.  The huge peaks in my terrain actually feel impressive, they have weight and loom above you, and standing at the base of a ruined tower and looking up at it, taking in the size and weight of the huge stone blocks in the structure, gives an amazing feeling.  Going back to the monitor seemed so bland and limited in comparison. 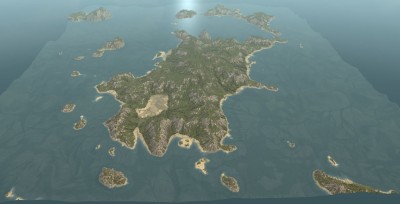 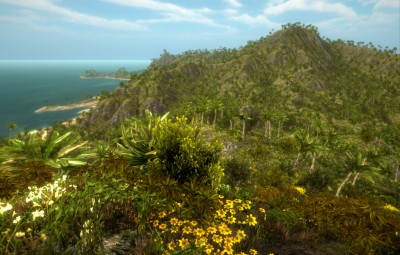 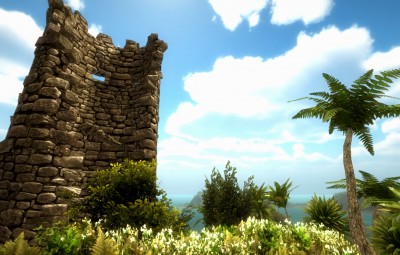 While the Rift is truly groundbreaking in finally delivering an immersive experience, it is also disappointing because it has instantly thrust us back to what seems like the output resolution of the original Doom.  The immersion tends to hide this however, and you sort of gloss over it just as you weren’t worried about how real the graphics looked in the original Doom when it arrived, because you were lost in the immersion it provided.

Also, this is a development kit and it will improve, but it is a glaring indicator of just how far we will need to go before we rival the fidelity we are now experiencing with the latest and greatest AAA games and graphics on nice monitors and TVs.  It will likely require a device with a resolution of over 6k to achieve the kind of fidelity we now experience through good monitors.  It will also require a monster GPU to drive this with dual camera views at high frame rates.

Hopefully the commercial version of the Rift will at least double the resolution to 2560×1600.  Folks are already trying to hack the development kits with Retina displays.  It may be a bit beyond the current crop of GPUs to drive that resolution split into two camera views at 60 FPS, but at least it will be there even if applications run at a lower resolution.  Doubling the resolution will also cut down on what is known as the screen door effect, which is the result of looking at the pixels of the display so closely through the optics, and will also allow better distance viewing.  Currently only things within 10 meters are rendered with any clarity, and everything beyond that begins to turn into colorful blobs, all because there are just not enough pixels to represent detail.  The sweet spot for seeing real detail is within 1 meter.

Many techniques that work well for a monitor don’t work well with the Rift.  For example, billboards and bump mapping both fail badly.  Other things, like tessellation, are likely going to become the basis for presenting detailed surfaces for devices such as the Rift in the future.  The Rift version of the Museum of the Microstar is clear evidence of this.

On a final note, my son turned 3 just recently, and I probably had one of the first birthday parties ever giving virtual roller coaster rides!  The kids were nuts over it and could not get enough, while the adults just gasped with OMGs. 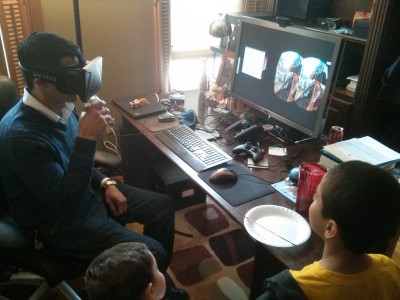